How to put on a condom?

Putting a Condom On

I always think that it’s more fun to put a condom on someone else than it is for them to do it, and this is how you do it …

p.s. If you haven’t done this before (putting a condom on) then the time to learn how is NOT in the middle of a romantic moment – Condom Girl suggests practising on a penis sized and shaped object.

Tear open – tear open the airtight wrapping in the middle or at the notch. Be careful to make sure that you do not damage the condom with sharp nails or any other sharp objects (teeth for example).

Right way up – make sure that the condom is the right way up examine the part of your condom that unrolls, if the roll is on the outside then it it the right way up, you should be able to see that it will unroll onto your ready and now quite impatient erect penis.

Be gentle – gently draw back the foreskin of your erect penis first.

Lubricant – if you need to use some extra lubricant make sure that it is water based if your condom is made of latex.

Unrolling – holding the tip of your condom between your thumb and forefinger, use the other hand to roll the condom carefully down over the whole length of the penis. If you accidentally try to put the condom on backwards and it won’t unroll, you will need to throw it away and use a new condom. The clear pre-ejaculate fluid on the end of the penis contains sperm and can carry infections; once a condom has touched the penis you can not safely turn it over.

Best bit – now you’re ready to put that penis somewhere nice – Condom Girl doesn’t have any suggestion here, but checkout the website for some ideas. 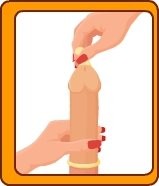 Shrinkage – the penis should be withdrawn before the loss of erection not afterwards when the seal of condom to penis might fail.

Remember, tie a knot – as soon as the penis has been withdrawn, remove the condom from the penis and tie the end. Remember only use a condom once!